A local’s guide to Chamonix freeride

I'm Sébastien Corret (known as “Bastiou") and I’ve guided for Chamex for more than 10 years. I’ve been exploring the Chamonix valley on skis and snowboard for more than 20 years, and here I present a series of articles I have written, detailing different ski areas in Chamonix and what is special about these particular places. In the first article we’ll visit the three areas located on the sunny side of the Chamonix valley.

I’m not talking about high altitude or glacier skiing in this article, but make no mistake; these spots are rich in amazing skiing, including steep couloirs, glades and ski touring for all levels.

Pop on your ski goggles and follow me into the depth of Chamonix’s secret treasures!

It's here - you can sense it - the promise of imminent fresh snow is in the air, announcing the start of Chamonix’s winter season. Another indication that winter is upon us; familiar silhouettes strolling through town with a pair of new skis in one hand and bindings ready to be mounted in the other. The sports store windows are gradually replacing trail running and trekking shoes, with various sliding toys for all ages.

Skiing in Chamonix is unlike any other alpine resort. Those who like gentle, mile-wide pistes, impeccably prepared with easily deciphered colour codes, may be disconcerted when they arrive at the start of a “beginner” blue run at Flégère. In Chamonix, the inclination is slightly steeper than elsewhere. Downhill skiing here is great, and the different areas offer plenty to satisfy skiers of all levels. However, the essence of skiing in Chamonix will be found elsewhere; at the foot of giant summits and on the glaciers of Mont Blanc range. In other words, the best skiing here is off-piste! 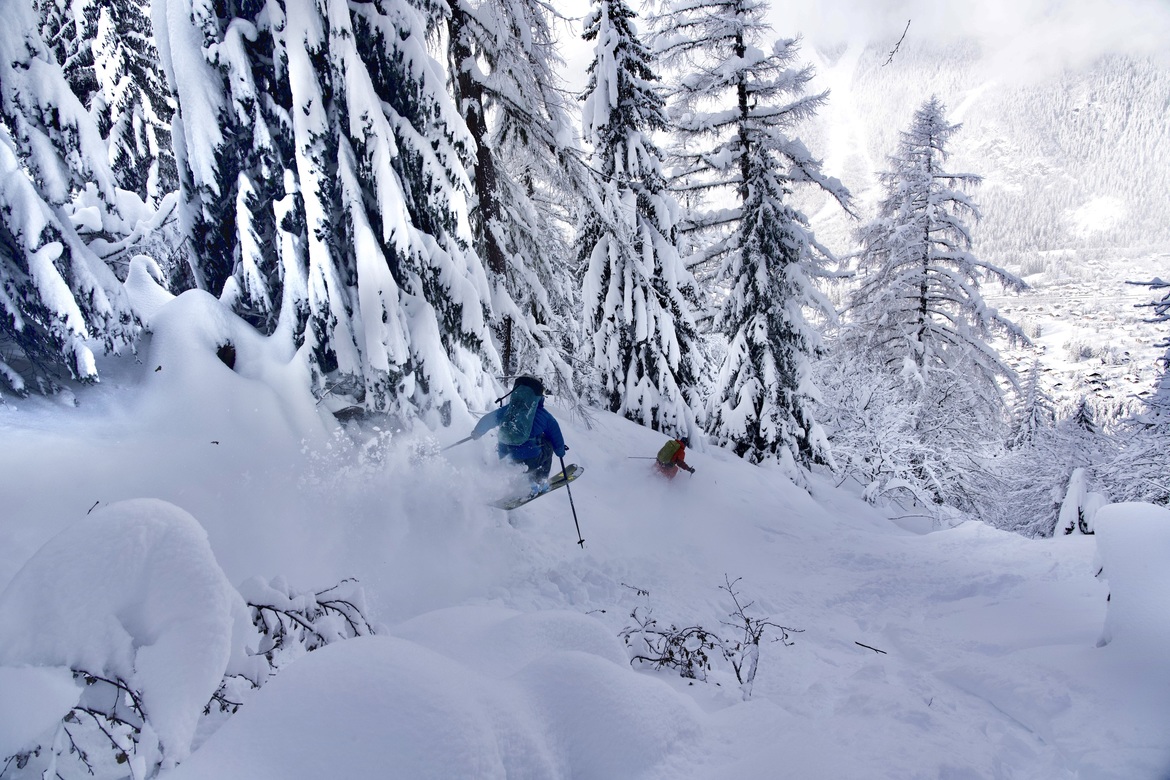 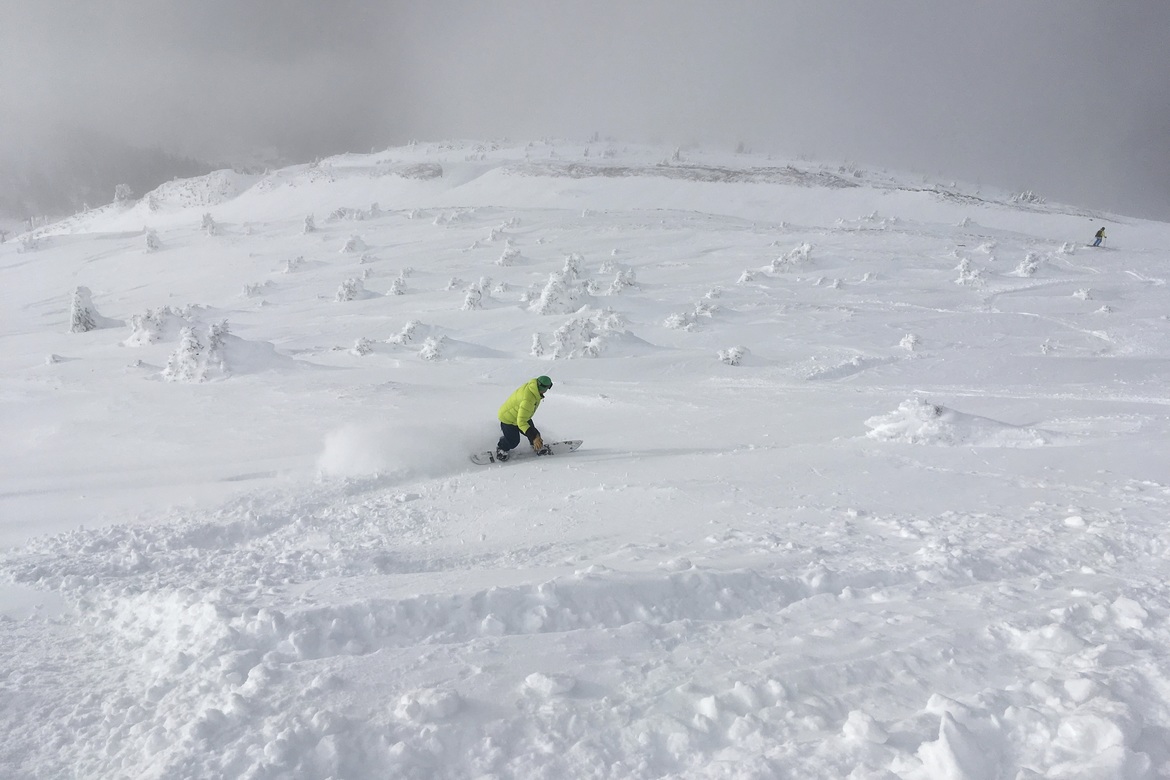 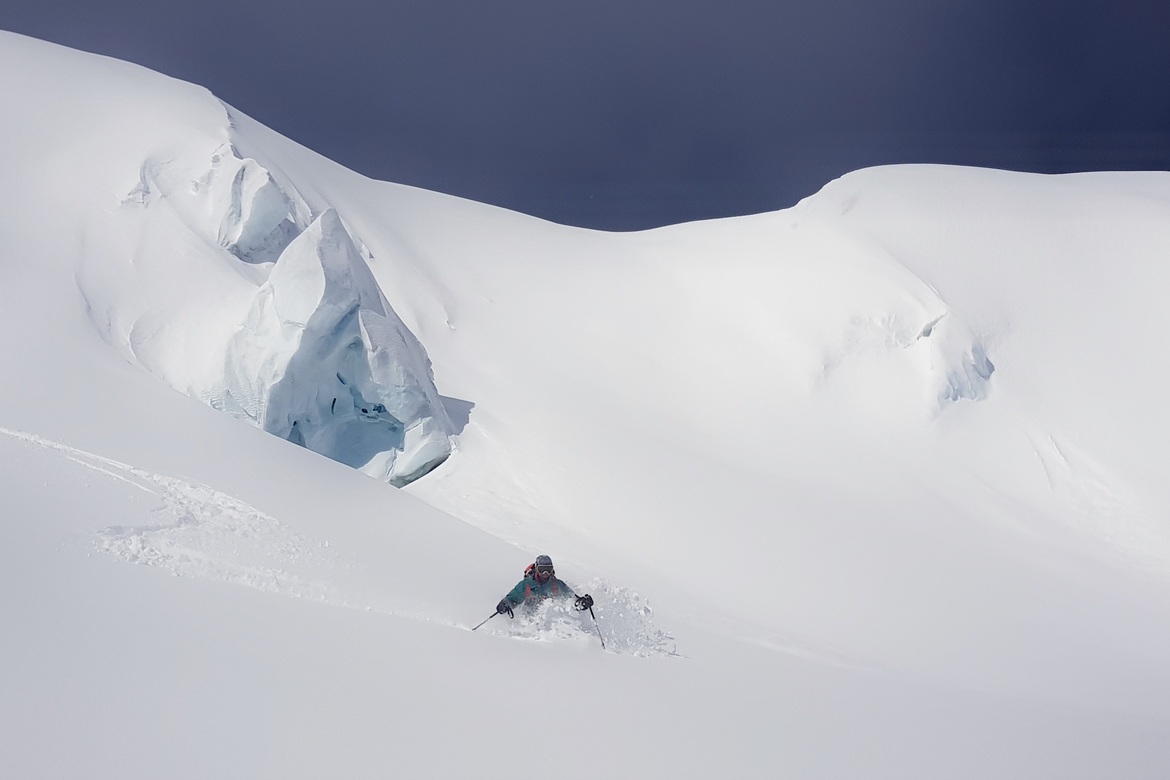 Skiing in Chamonix was introduced at the end of the 19th century by Dr. Payot who, while visiting his various patients and as a good pioneer, immediately understood the value of the wooden boards imported from Scandinavia for travel in the mountains (he was also part first ski crossing from Chamonix to Zermatt in 1903).

Alpine skiing was developing well at the beginning of the 20th century but, despite its growing success, did not make it onto the program of the first Winter Olympic Games, held in Chamonix in 1924. The prolific period between the wars saw a notable boom in alpine skiing, boosted by the construction of cable cars, the culmination of which was the post war construction of the Aiguille du Midi cable in 1955.

You will observe that the different ski areas are not connected, and moving between these areas requires the use of public transport. Skiing to the town center does not exist as in many other resorts but Chamonix is not a ski resort, like others. Rather, it’s a small mountain town where the lifts were built around the existing infrastructure. This said, Chamonix will always remain a mecca for alpine skiing. 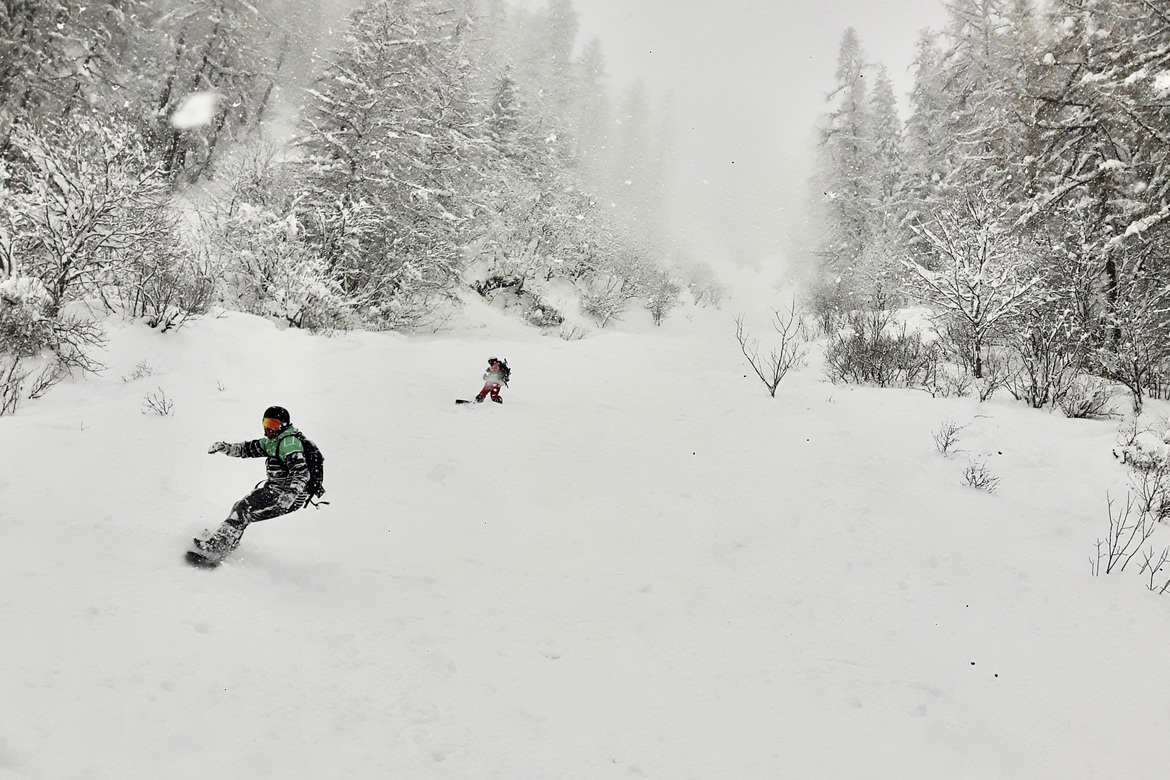 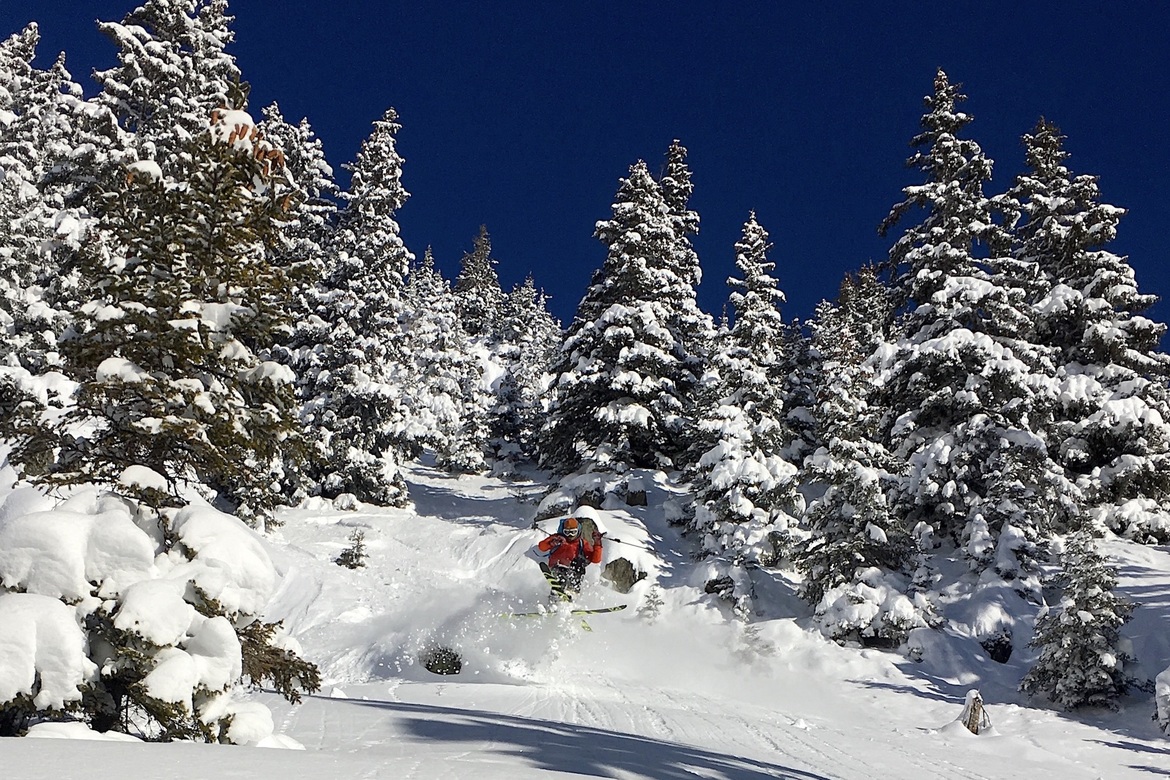 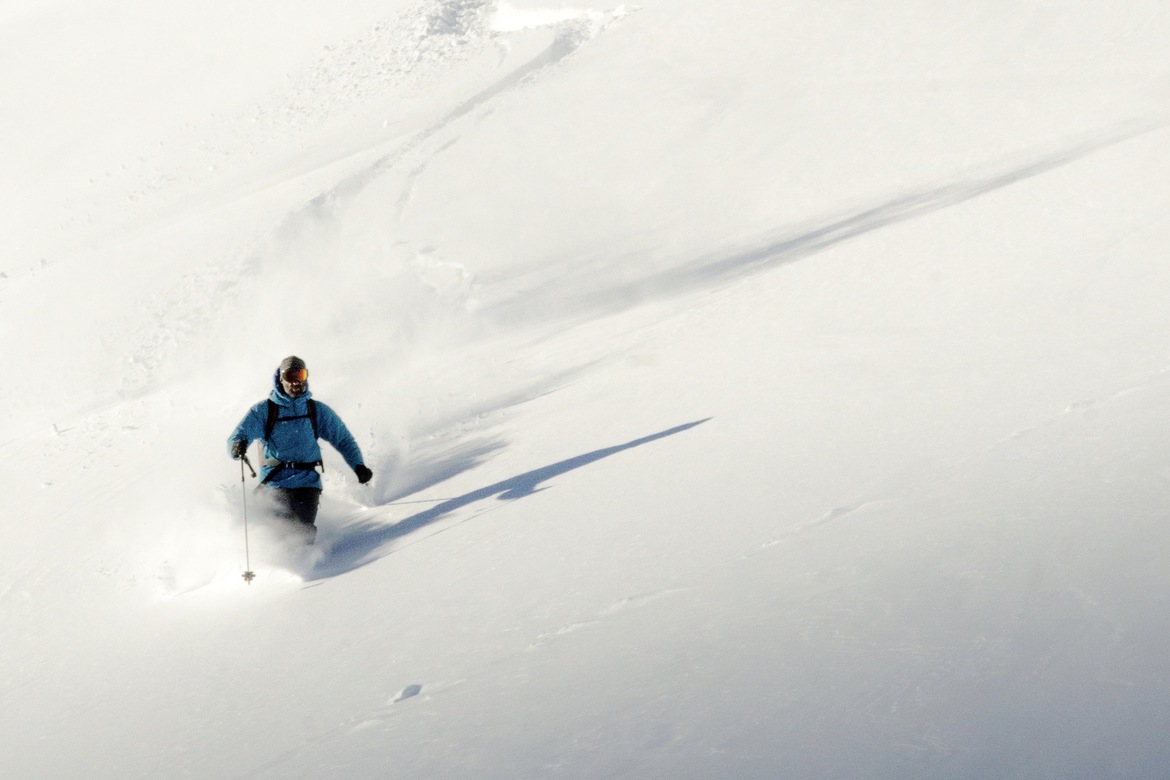 Directly above the town, to the south, and in the heart of the Aiguilles Rouges (Red Needles), is the Brévent ski area. Le Brévent offers fantastic skiing right at the beginning of snowy winters.

The couloirs here are certainly the favorite spot of many local skiers (mine for sure). Long steep white stripes cut through the steep spruce forests and descend all the way to Chamonix. In their longest form, starting from the cable car at 2500 meters, and taking the "Bellin couloir", "ENSA couloir", or the "Poste à Payot", they offer a negative vertical drop of up to 1500 meters non-stop. Even the strongest skiers will feel their legs burning!

The face of the Autel (not Hotel Face, as it is known by many), is accessible from the top of the same cable car. Requiring a short walk in the midst of famous rock towers; the Aiguilles Rouges are home to some super summer rock climbing. Without removing the skis, we would descend, traverse, and sidestep until we arrive at the top of these famous slopes where the first freeride competitions in Chamonix were held. These relatively steep and regular slopes offer the perfect place to discover steep skiing. As is often the case in skiing, the steepness is one thing, the quality of the snow another, and it is the latter that essentially makes the difference. Here, the eastern orientation guarantees cold snow at the very beginning of the season, and the morning sun can transform hard snow later in the winter. In short, the perfect place to hone your off-piste ski technique and your understanding of differing snow types.

My best of Brévent:

Freeride skiing or snowboarding: From the mid station of Plan Praz, different lines descend directly beneath the gondola; provided that the temperatures are cold (sunny side) and the couloirs are full of snow.

Steep skiing: The east face of the Aiguille de la Charlanon. Short but spicy, with slopes up to 50 degrees. 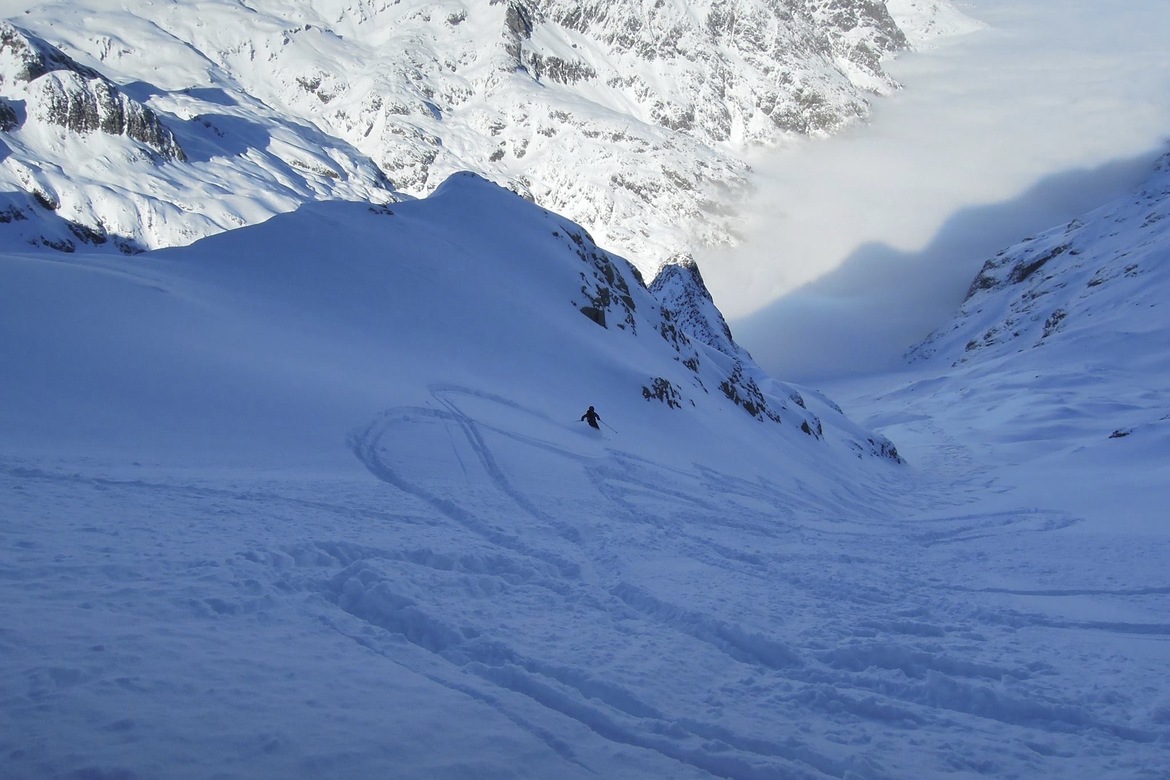 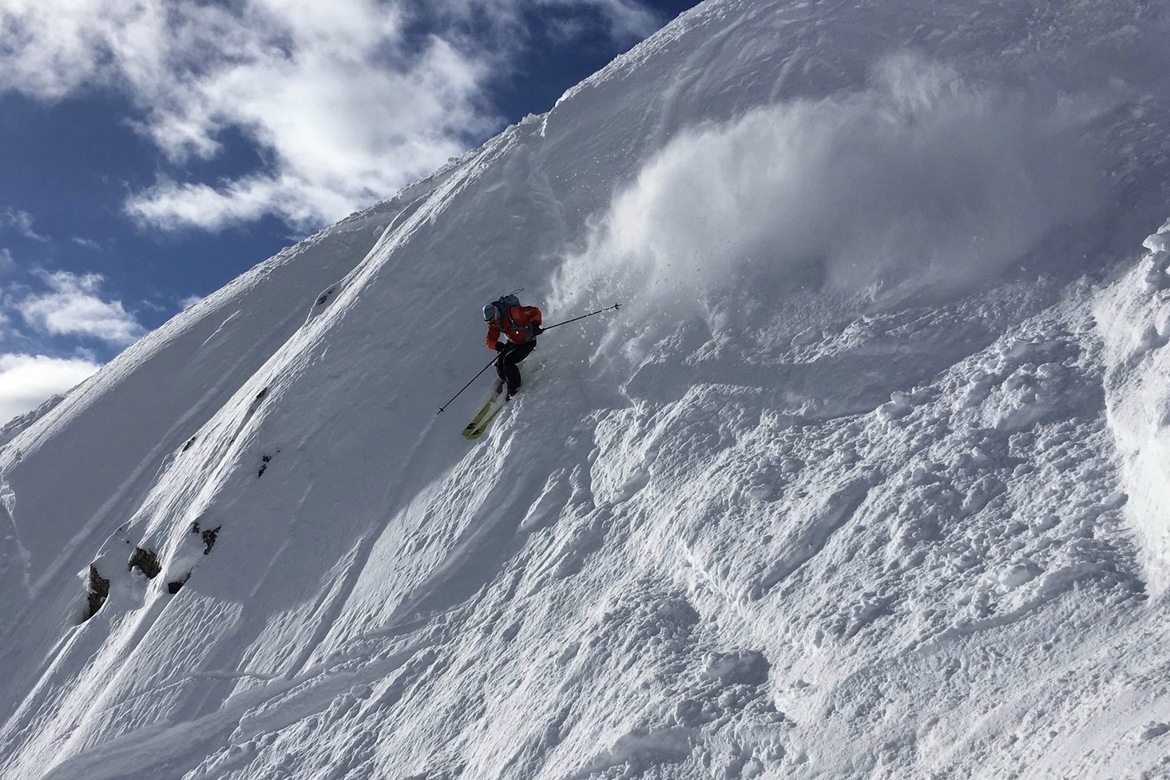 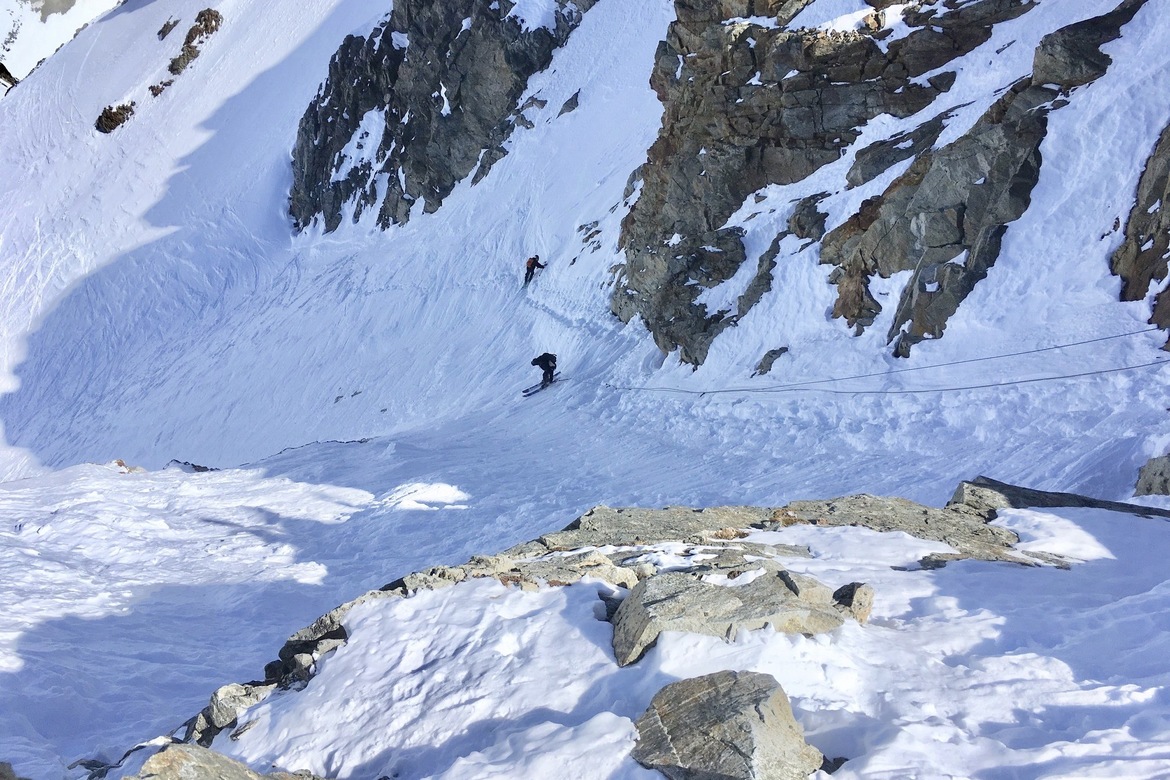 On the same side of the valley, accessible from Les Praz (or linked by the Liason cable car from Le Brevent), is La Flégère. With extraordinary views of the Aiguilles de Chamonix across the valley, this resort also offers countless forest lines (some of them secret…), in the early winter months. Later in the season, as the sun becomes warmer, spring skiing is king and La Flégère becomes the starting point for many classic ski touring itineraries, such as the "Crochues-Bérard", "Col de Beugeant,” "Col du Belvédère," plus many others.

The Col des Dards, for me, is among the best beginner ski tours in the area. Whether on skis or splitboard, the climb is not too long, is varied, passes the picturesque Lac Blanc. The descent is on undulating terrain with different exposures, which is very practical for finding good snow in difficult conditions.

Freeride: First tracks from the top of the Combe Lachenal linked with the “golf couloir.”

Ski Touring or Splitboard: For beginner off-piste skiers or split boarders, a mini trip from the Charlanon chairlift, an ascent to the col de la Glière, and a descent to la Flégère from the combe de la Glière or it’s variants of the "Petite Alaska;” the free ride world tour slopes.

These two ski areas in the Aiguilles Rouges, while relatively modest in kilometers of slopes, offer the adventurous skier an incomparable playground, bathed in sunshine and light; a winter rarity in the valley below. CHAMEX guides love to ski here, whether to introduce you to ski touring, take you down long, uninterrupted, aesthetic lines, or introduce you to the world of "steep skiing.” 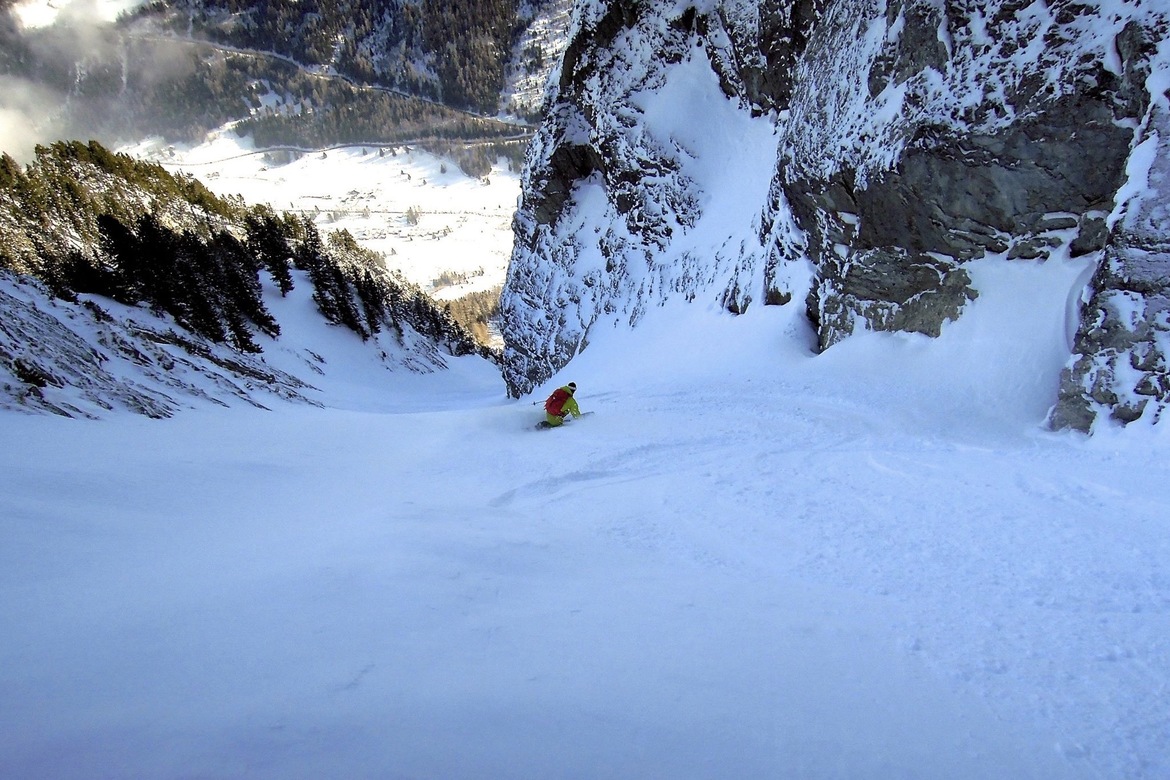 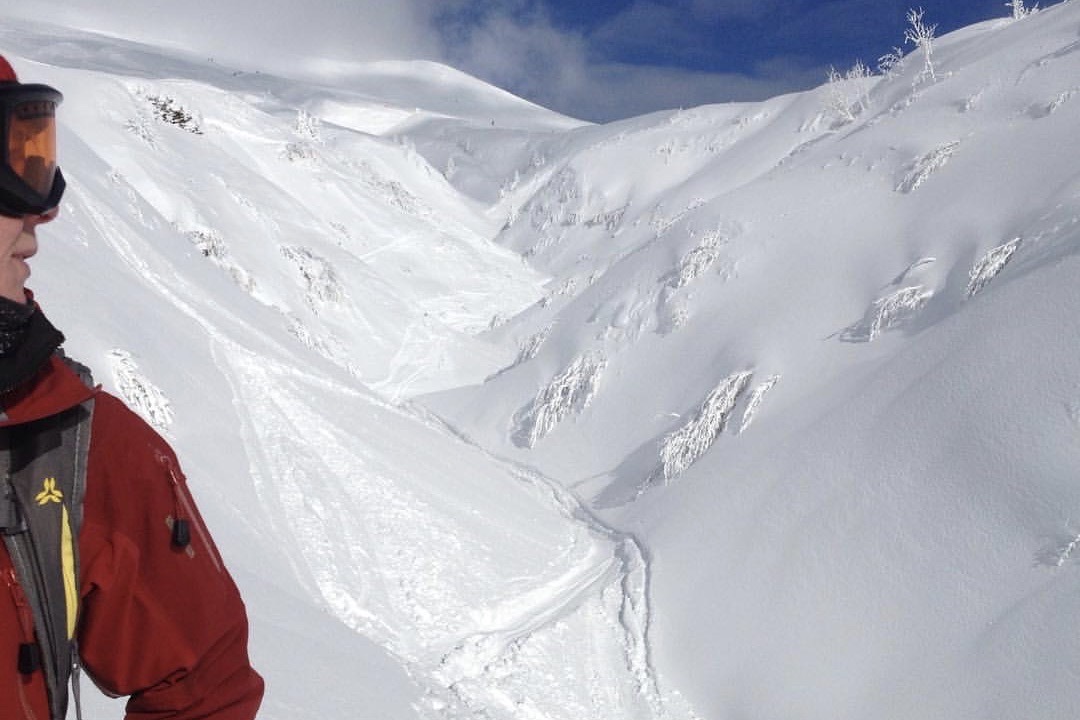 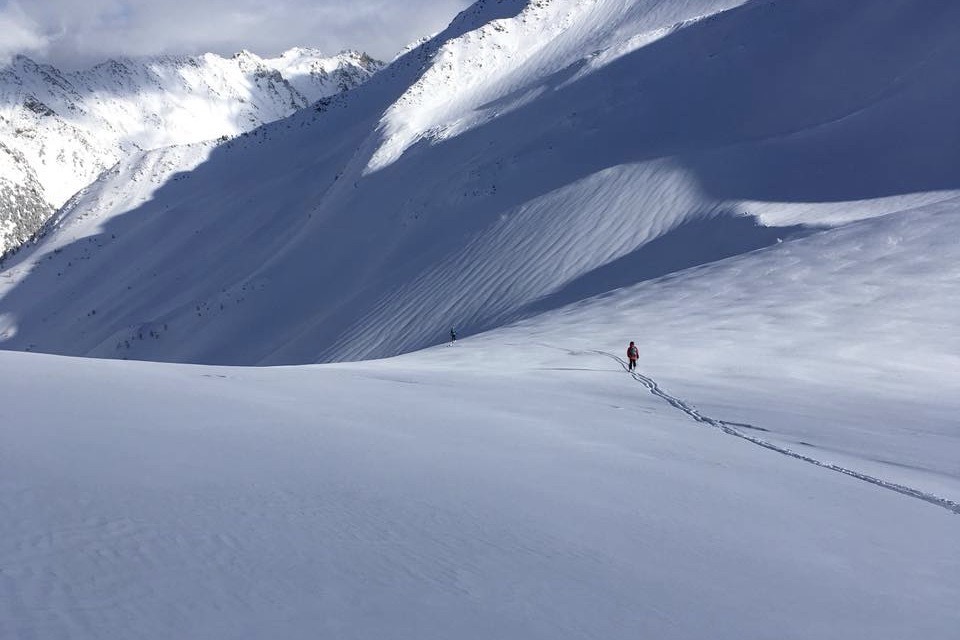 Further east is the Balme area, which, at it’s highest point, shares the border with our Swiss neighbors. This area offers skiers two distinct faces. It’s western side is of rather modest steepness, and the slopes do not exceed red in difficulty; a delight for carving!.

For the off-piste skier, this spot offers short, fast, but varied and technical runs. The north-facing couloirs of La Vormaine lead back to the foot of the resort, with short but very steep lines. Opposite, the eastern slope of Les Posettes takes you to the same place on varied, hilly terrain, just perfect for building confidence off piste. The spacious forests on the backside of the resort invite us to lap a multitude of more or less steep and technical lines from the Esserts chairlift.

From the top of this same lift, CHAMEX guides will show the willing boot packing freerider a new playground. A 10 minute walk takes us to the "Tête de l’Arolette.” 3 steep couloirs, or a gentler slope, mark the beginning of some fun runs ending in the Combe des Jeurs. From the same place an "adventurous" skier will be happy to be guided along incredible itineraries such as "Le Nant noir,” which is well adapted to the most modest of skiers, or the "Couloir du Van" and the “Orvé;" more committing itineraries reserved for excellent skiers. I must also mention the North face of the Grandes Autannes where, even long after a snowfall, you can still find very cold powder (Shhhh…it’s a secret!).

This area is unique, wild, and far from the crowds; these itineraries finish in Switzerland! In the small picturesque village of Trient, a taxi will be waiting to transport us back to France and the ski lifts in Vallorcine. A day of riding in the Balme area cannot end without a final run in the steep forest couloirs on the north side of Les Posettes. This last spot, another must for the local riders, offers us half a dozen different lines and 800m descents to the hamlet of Le Buet. Classically, a day here ends with a beer at the Hotel du Buet, followed by a free train back to Chamonix.

My best of Balme:

I hope I’ve got you stoked for the upcoming winter! These are our favourite ski areas and we will be delighted to show you around with one of our Private Ski Guides. We also ski there with our Off Piste Ski Courses, Snowboard Courses and Ski Touring Courses. Our guides know the terrain like the back of their hands and will always find the last secret stash of good snow.